The Regimental Standard: Why You’re Better than a Necron

The Regimental Standard: Why You?re Better than a Necron

We have some encouraging news ? the boffins over at High Command have been busy investigating the nature of the Necron menace that has been cropping up across the Imperium, especially in the region of the Nephilim Sub-sector. The good news is that the tireless research of our finest minds has reached one undeniable conclusion ? that the machine race is simply no match for you, the humble Guardsman, on any level!

To celebrate these findings, we?re sharing the following inspirational leaflet with you, containing some of the conclusions drawn from their research.

While the forces of the Imperium have spent millennia slaying the foes that assail our domain, the lazy Necrons have been napping! Remember: a drowsy foe is easily defeated.

They Have Terrible Posture

How can their warriors fight when they can’t even stand to attention properly? Just look at them, hunched over like old men ? an endless, silent tide of elderly androids. They should?ve been retired from active duty aeons ago! 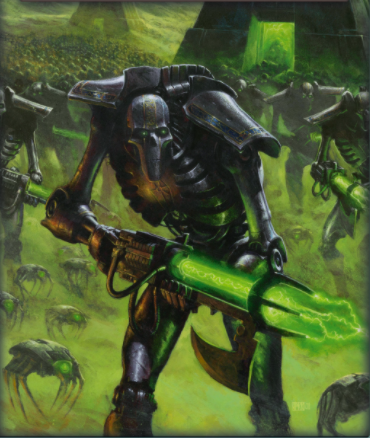 The bodies of the Necrons are just pale imitations of the human form. Your body may be soft and squishy, but your extensive bayonet training has turned it into a living weapon ? one that no armoured imitation could hope to match in battle.

Their Guns Are Silly

The firearms that they carry just emit a strange green light. That’s not very threatening! Your trusty lasgun, meanwhile, emits a majestic RED beam ? the crimson manifestation of the God-Emperor?s holy wrath.

Necron warriors all look the same and can only do what their programming tells them to. Now, put on your identical uniforms and report to your commanding officer for your mission orders, Guardsman.*

So good luck, Guardsman ? go and slay those foul xenos in the name of the God-Emperor and reclaim the region for the Imperium.

++Thought for the Day: Fear that which you do not know; Kill all that you fear.++

* Remember that failure to carry out orders without question is a capital offence that will result in your immediate execution, courtesy of your regimental Commissar.

The Regimental Standard: Why You’re Better than a Necron

The Regimental Standard: Imperium’s Most Wanted

The Regimental Standard: Create Your Own Cover

Why Servitors Are Better Than You